Five Things You Must Do in Berlin

Berlin is one of those cities that’s on most people’s bucket lists. Steeped in history, this iconic city was the backdrop for both a revolution and the reunification of a divided country. There are so many things to see in Berlin that you might be at a loss as to where to start. Our handy guide highlights the top things to do in Berlin and some of the best historic Berlin landmarks.

Berlin sightseeing isn’t complete without visiting the incredible sandstone pillars of the Brandenburg Gate. Inspired by the Acropolis at Athens, the imposing Gate was the first ‘Greek Revival’ style building to appear in Berlin. The 18th century monument is topped by the famous Quadriga statue, once stolen by Napoleon Bonaparte but then reclaimed in 1814 and placed atop the Brandenburg Gate, where it points towards the city centre.

Located to the west of the city centre, the Brandenburg Gate was sadly inaccessible for many years while the Berlin Wall stood as a barrier between East and West. When the wall fell, over 100,000 people gathered for the Brandenburg Gate’s official reopening. It now stands as the symbol of the reunification of a whole and united Germany.

Travellers will find a tourist information centre at the south wing of the Gate, making it a great starting point for any exploration of this historic city. If you’re stuck for what to do in Berlin, this iconic landmark is in the centre of many other wonderful sights including the Reichstag, the beautiful Unter den Linden Boulevard and Tiergarten Park.

One thing you must do in Berlin is visit the Wall. A symbol of the Cold War and a physical reminder of how divided Germany once was, all that is left of the Berlin Wall is about 2km of the original concrete barrier. A long stretch of around 1.3km is the top place to visit. It’s known as the East Side Gallery and is quite literally the world’s longest open-air art gallery. Over 100 paintings and murals document the intense emotional outpouring of the world post 1989 and the fall of the Wall.

The route of the rest of the demolished Wall is still commemorated with a double row of cobblestones that shows where the Berlin Wall divided East from West. Depending on your level of mobility, you can take a bike tour, or even a 160km guided walking tour along the path of the entire wall. For the tech savvy, there are digital tours that provide commentary, interesting facts and even GPS guidance to keep you on the historic path of one of the most controversial landmarks in European history.

Since 1830, the island has allowed the public access to artefacts, art and a greater understanding of history. It’s a product of what we now refer to as The Age of Enlightenment, and by 1930, five museums stood proudly on the island, filled with some of the finest and most unusual pieces in the world. 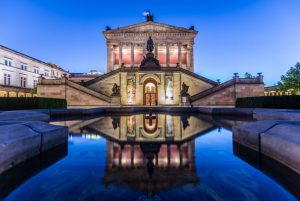 Today, you can expect to see treasures like the Ishtar Gate, the Roman Market Gate of Miletus and the incredible and awe-inspiring bust of Queen Nefertiti of Ancient Egypt.

The entire ensemble of museums is constantly being updated, and a new entrance building was scheduled for 2018, inspired by the Louvre in France and called the James-Simon Galerie. Visitors to Berlin can buy tickets that allow access to all five of the museums, which works out to be excellent value.

If you’re looking for fun things to do in Berlin, animal lovers need look no further than Zoo Berlin, or Zoologischer Garten. From walking through the 19th century Elefantentor (Elephant Gate) to coming face to face with actual giant pandas, this is a zoological experience not to be missed.

Proposed in the mid-19th Century by African explorer Martin Hinrich Lichtenstein, landscaper Peter Joseph Lenné and the naturalist Alexander von Humboldt, the first animals housed here were donated by King Friedrich Wilhelm IV from his personal menagerie. Today, the zoo is home to around 1,400 species and 20,000 animals, from arctic wolves to zebras.

As well as the main zoo, you can visit piranhas, sharks and even a coral reef at one of the finest aquariums in Europe. Before you book, check out their website for events and the schedule, including the not-to-be-missed feeding times.

One of the top Berlin attractions that must be seen is the iconic TV Tower. The most visible landmark in the city, the tower soars 368m high and is the tallest building in Europe which is open to the public. For those that don’t mind heights, there’s a viewing platform from which you can see spectacular panoramas of the entire city. There’s an express elevator that takes just 40 seconds to propel you to the platform, and telescopes to get close ups of the surrounding countryside and landmarks. Remember to take a few coins with you for these. 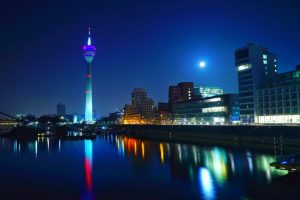 Previously a symbol of East Germany and communism, the tower is now a symbol of a unified Berlin and Germany and draws huge crowds on a daily basis. Around a million visitors come each year just to see the tower, with its Panorama Bar and unique revolving Sphere Restaurant. It’s best to book in advance to beat the queues, and early mornings are the best time to get to the viewing platform without a long wait.

Berlin is an amazing amalgamation of history, incredible architecture, stunning landmarks and fun things to do. No matter where you want to visit, we can make sure you have the right travel insurance to cover your needs, so get in touch for more information.