Motorists are being warned that speeding fines are stricter and penalties tougher as of Monday 24 April 2017.

Under new sentencing guidelines, courts in England and Wales now have the power to dish out longer sentences and more serious fines to drivers who break the speed limit.

The rules, designed to make motorists “think twice”, will see the most serious offenders fined 175 per cent of their weekly income, instead of the existing level of 100 per cent.

The minimum penalty for speeding in the UK was a £100 fine and three penalty points, but under the new guidelines fines will be banded into different categories.

Anyone caught driving at more than 101mph in a 70mph zone could be disqualified for up to 56 days and fined up to 175 per cent of their weekly income.

Drivers caught speeding between 31-40mph in a 30mph zone can expect to receive a fine equivalent to 50 per cent of their weekly income.

Fines are not unlimited. They’re capped at £2,500 for speeding on a motorway and £1,000 everywhere else, but offenders also face penalty points on their licence.

The changes have been made after a consultation in 2016 argued existing guidelines failed to take into account the potential harm of speeding – and the risks it poses to the public. The Sentencing Council said the move aims to ensure there is a “clear increase in penalty as the seriousness of offending increases”.

Remember that a disqualification or points on your licence is something you must tell your insurer about and it will have an adverse affect on your premium.

Points remain on your licence for four years, and if you are disqualified for 56 days or more you must apply for a new licence before you are able to start driving again.

At Fish Insurance, we’re welcoming the new guidelines as we hope it will increase safety on the roads and keep premiums lower.

You might find the below visual helpful in understanding the new fines. 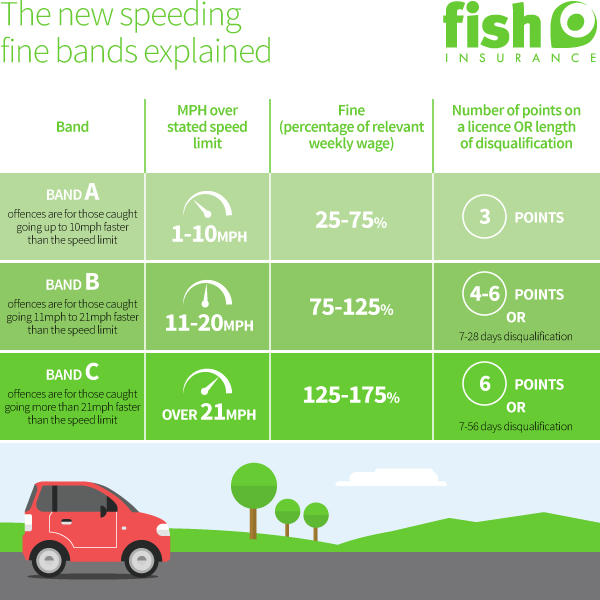